None of my best friends and few of my family members and co-workers were voted “most popular” in school. That’s not to say we weren’t liked; just that most of us didn’t stand out from the crowd much.

As for me, I quit the football team after my sophomore year (due to growing back problems), and barely existed by the time I graduated high school. In my tiny circle of friends was Kurt, my best friend, Fred, who has a close second, and Todd and James, who were both a couple years younger than me. I called us “the freaks” because we were sort of in the middle, not really belonging to any specific crowd. I took four years of math, so I was accepted by some of the top academic students—like my buddy Robert—and I had played two years of football, so I was still accepted by some of the jocks. Still, I was sort of floating in the middle of the popular kids, the scholars, the jocks and the ones who partied, drifting in and out of their circles, not really a part of any of them.

That’s not tears in my milk you just read, it’s just me stating the facts.

Like Popeye says, “I yam what I yam and that’s all that I yam.” No regrets, seriously.

Fast-forward several years later; I work at a Christian, distance-education university, mainly dealing with undergraduate students and prisoners. I receive letters and emails almost every week, thanking me for my assistance, with students claiming I help to make their educational experience much smoother.

Fact is, God loves each of us, just as we are. Some of us might feel we have to lose weight, color our hair or get our teeth fixed before we look more presentable, but just like any proud daddy, the Father cherishes us just like we are. We are His children, and He’s crazy about us. People have and will think what they want, but to the Lord, we’re exactly how He created us to be.

First Samuel 16:7 says, “God doesn’t look at what people see. People judge by what is on the outside, but the Lord looks at the heart.”

You’ve heard that before, but I’m here to reiterate it. I don’t care if people called (or still call) you stupid, ugly, slow, fat or a waste-of-space; their opinions mean nothing in the grand scheme of eternity.

Forget ‘em. Cling to the One who created you to be a perfect part of His universe.

To God, you’re beautiful and amazing. Not even kidding.

I recently found out a good friend of mine, who is 20+ years older than me and whom I’ve known all my life, has low self-esteem. This honestly broke my heart, as she is such a sweet and beautiful person. I even had a crush on her when I was a kid! A few weeks ago I was informed this lady was called “ugly” quite a bit when she was a kid, and, as many of us do, she carried this opinion into adulthood. She’d kept it hidden for so long, but then a few months ago I took a picture of her, and she sort of laughed and said, “Hope I didn’t break the camera.”

She played it off as a joke, but something told me she was serious. The person who had informed me about this lady’s low self-opinion said, “You should tell her about your crush on her when you were a kid.” I replied, “I don’t know, don’t you think that’d be weird?”

But here I was, standing there with an open door from her self-deprecating statement. So I took advantage of the situation—as feeling prompted by the Spirit—and said, “No chance of that happening. Did you know I had a crush on you when I was a kid?” She giggled and said, “What? Really?” Not wanting to seem inappropriate, I added, “Yeah, I told Laura (my wife) about it when we were going together, and she said, ‘No wonder, she’s very pretty.’ I don’t know, just thought I’d tell you that.”

I think it helped her that day. At least I hope it did. I hate that people carry their baggage into adulthood, although I did the same thing. As I’ve written before, my mom and I were both called variations of “fat” when we were growing up, and it carried over when we were adults.

I still can’t look in the mirror without seeing myself as fat, although the Lord is helping me through that.

I recently went to visit a friend of mine, and noticed something on the way into his house, which I thought I’d share with you.

He owns his own business, which is in a warehouse, and he’s built a nice home for his family into that warehouse. This is how it looks from the outside: 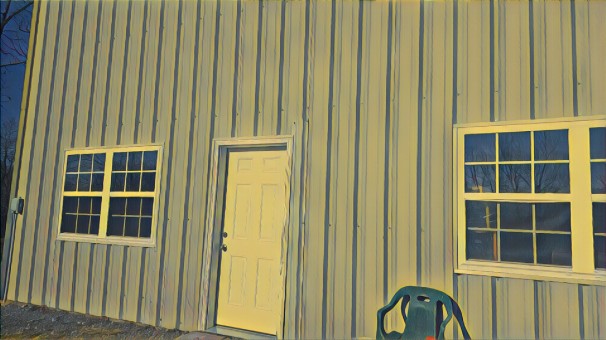 But walk in and you’ll find beautiful wood floors, stunning, home-made cabinets and his amazing family, all smiles and happy to see you. 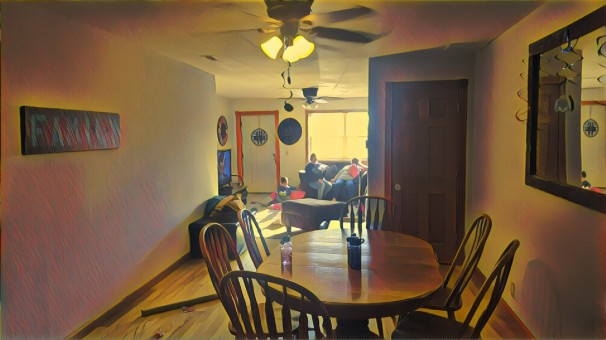 People who pass by on the road see nothing of consequence, but inside, it’s teeming with life, love and beauty.

I’d like to assert the fact that you may fit into that category as well.

Thus, I’d like to implore you to not sweat the labels others have assigned to you.

As those cheesy t-shirts say, which I’ve seen advertised all over Facebook: “Jesus thought you were to die for.”

Yeah, I went there. Sorry, couldn’t help myself.

So let’s try and walk in the victory God has given us. May we encourage each other at every turn! May we lift up and not tear down!