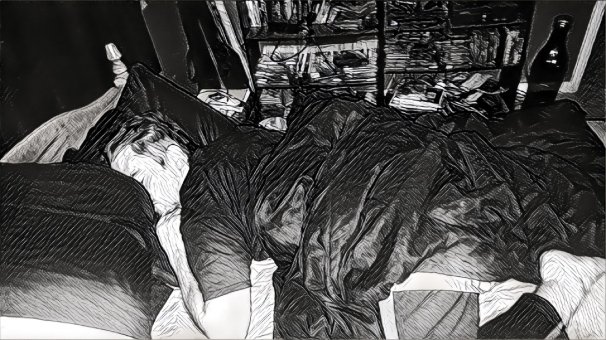 I called in sick to work today because of a terrible, splitting headache. It’s highly unusual for me to miss work, and I’m not sure if the dizzying headache caused my nightmare, or if it was God-sent.

In the dream, my son, Trey, and I were in Europe. I have written a couple of times about our trip to England and Scotland in March of this year, but the dream was as if we were in England right now.

The time frame makes a difference because there have been several terrorist attacks in London the last few months, the first of which happened one week after we were standing in the same spot. The horror of a possible attack added to the soon-coming fear.

In the dream, we were in some type of waiting room, I think it may have been an airport. There was a large group of us, and we hadn’t slept the night before, so we were tired. A good friend from work, Linda Seals, was there, and she suggested that, since the chairs we were sitting on had no backs, we sit back-to-back, leaning against each other, to try to get some sleep.

I’m not sure how long I slept, but when I woke up I was laying flat on the floor in a dark room. I hopped up quickly and found no one from my group there with me.

Linda and my son were nowhere to be found, which instantly put me in panic mode. I began to run around like a madman in this warehouse, which had several rooms in it. One room had several people, but I didn’t recognize anybody. I frantically searched for a friendly face, but was met with nothing but scowls.

My son was gone. My friends were gone, and I was horrified.

I pulled my wallet out and noticed my I.D. and passport, along with all my credit cards, we’re gone. All I had was a little money, a few British pounds. Thus, all I could do was eat, and had no proof of my identity. I found a British policeman and told him I was lost, and he began asking me questions I could not answer.

“What’s the name of your group leader?”

“Chris…..Chris something. I can’t remember his last name.”

“What hotel did you stay in last night?”

“I can’t recall the name of it, sir. I’m totally out of my element over here.”

He basically informed me there was nothing he could do to help me unless I could give him some more information. I ran away frantically, and began to cry. Sounds overly sentimental I guess, but it was frightening.

It was at this point I began to wake up, and very slowly became aware of my surroundings. My beautiful wife gradually came into focus, and then I looked around and seen I was in our bedroom. It was only then I realized I had been dreaming.

But it felt so real.

Once I realized the nightmare was over, the first thing I thought of was my life before Christ. That may seem odd, but I recall the feeling of wandering through life with no purpose and no hope.

What I am saying is, I can relate to that feeling of fearful emptiness. Walking in the dark and not finding a shred of hope from anybody. In this dream, I was doing nothing but irritating people, and I recall a time in my life I actually felt like that.

It’s the horror of loss of hope.

I cannot stand before you and scientifically prove there is a God, as if I’m doing the math for the theory of relativity. All I know is that I was once lost and now I’m found. There was a point in my life when I was terrified, as in this dream, wandering aimlessly through life and not finding anyone to help me. Trudging through the darkness, terrified, not a friendly face to be found.

The Lord has blessed me with an amazing family, both by blood and my church family. We can lean on each other, like Linda, Trey and I did in the dream.

What was lost is now found, and I will be forever grateful.

“God showed how much he loved us by sending his only Son into this wicked world to bring to us eternal life through his death. In this act we see what real love is: it is not our love for God but his love for us when he sent his Son to satisfy God’s anger against our sins.