Welcome to the Freakshow 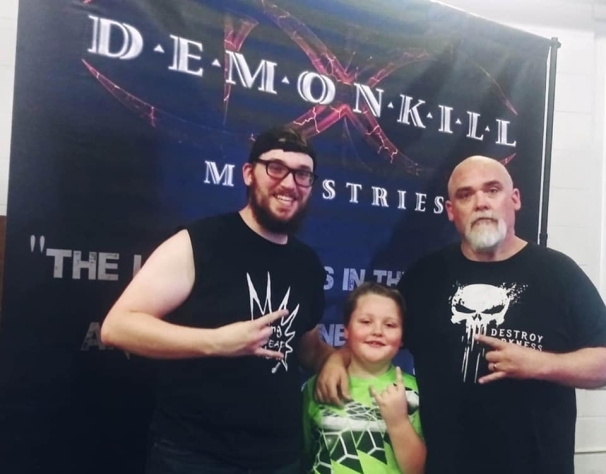 (From left: Trey Weddle, Joshua Cockrum Jr and me)

I had the privilege of representing my family’s encouragement outreach, Demonkill Ministries (https://www.facebook.com/demonkillministries) at the Chains Unchained Festival this weekend in Springfield, Missouri.

In case you’re not familiar, “Chains Unchained” is a Christian heavy metal festival, and a remarkable one at that. So many amazing bands, and way too many musical stories to share, but my family and I were there in a ministry capacity.

Talking and praying with those who struggle with depression, addiction, suicidal thoughts, separation and divorce, chronic physical agony and on and on. We have a heart for the broken, because we can relate to pain.

Ya see, we’ve been through a lot.

This is, from left to right, my son, Trey (drummer for Saturday’s opening band, Sacred Throne), my daughter, Jessica, and my son-in-law, Josh.

Jess has a genius-level IQ, and graduated high school two years early, but left home and suffered drug addiction and more while she was away from her family and God.

Josh was also an addict, and battles anxiety. In fact, his anxiety was so bad, he couldn’t work for 15 years. He and Jess married, then divorced because of his addictions.

The marriage was dead and buried, in shambles, but a sweet little British lady from my work, Edith Kaiser, came up to me after the divorce was finalized and said something so bizarre, it almost didn’t register.

“I’ll be praying for the Lord to restore the marriage,” she smiled.

I nearly laughed in her face.

“God can do the impossible,” I thought to myself, “but He can’t do this. You don’t understand how bad it is. You don’t know how ugly it’s gotten.”

I’m VERY proud to say I was proven wrong, and one year later, their son (Joshua Jr, pictured at the top of the page) was the ring bearer at Josh and Jessy’s second wedding ceremony. Today, Josh works maintenance for our church, and Jessy has a Bachelor’s Degree in nursing, supervising hospice nurses. Joshua Jr. is seven years old and in the gifted program at school, and their granddaughter, Jenna-Marie, is a precocious two-year-old.

Trey went through a really rough time when he was in middle school. He had a slight stutter, and remembers walking the field at recess alone, thinking he had no friends at all. He nearly committed suicide before he was even a teenager, but God spared him. The Lord showed Himself to be real and alive, and a loving Father.

As of this writing, he’s two semesters away from graduating with a certificate as an electrician’s associate, drummer/co-founder of Sacred Throne and engaged to Maria, a wonderful, Christian woman.

Regarding MY struggles, I’ve written at length about my suicide attempt when I was a little older than Trey is now, and of my battle with chronic pain and depression.

My mom fights an eating disorder, and all her brothers and sisters—my uncles and aunts—suffer terrible, consistent pain in their back, hips and legs (it’s a family curse, I suppose). They have all had multiple surgeries, walk with canes or wheelchairs and one is on oxygen.

Uncle Aaron was one of those alcoholics and drug addicts whom you knew would die from his addictions. “It’s not a matter of IF Aaron is gonna die from an overdose,” we’d say, “but WHEN.” Today he’s clean and sober, helping other addicts to maneuver through their daily lives.

My sister was nearly beaten to death by her second husband, and was also a drug addict for many years. Thankfully, she’s now married to a man who treats her well, and the Activity Director at a nursing home in the same town where our parents live.

On and on my family’s grim tales continue.

But Jesus has saved us ALL, man. Every freaking one of us. None have perished from our darkness.

Speaking of, it’s funny, when you hang out at any heavy metal event, nearly everyone has darkness in their past. Most of us were not popular in high school, and many of us were bullied. We carry scars of addiction, depression, anxiety, fear, grief, self-harm and suicide attempts.

“A collection of freaks,” we often call ourselves. 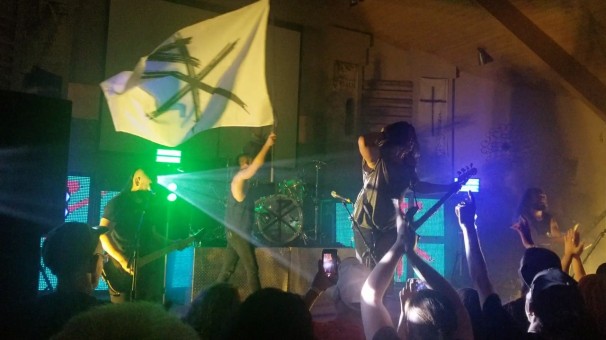 To that end, Friday night’s outstanding headliner, The Protest, wrote a song called, “Welcome to the Freakshow.”

“Step right up you won’t believe your eyes
If you think you’re brave then come inside
If a thrill is what you need you’re in the right place, you can take it from me
You won’t be able to wipe the shock from your face, you will be left stunned
You may feel a change but don’t be afraid (the transformation has just begun)

Just let the freak show take you away
It’s like a sideshow for the insane
You can feel it enter your brain
But don’t worry you won’t feel a thing
In the freak show, your mind will be blown away
Welcome to the Freakshow

Just let the freak show let it take you away
It’s like a sideshow for the insane
You can feel it enter your brain
But don’t worry you won’t feel a thing
In the freak show,  your mind will be blown away”

Jesus had quite a collection of freaks Himself when He walked the earth, I think. He could’ve had kings, knights, warriors and statesmen at His feet. Instead, He assembled a group of fisherman, tax collectors and other “commoners.” Depending on the moment, you could find Him hangin’ out with reprobates or children.

“Abruptly Jesus broke into prayer: ‘Thank you, Father, Lord of heaven and earth. You’ve concealed Your ways from sophisticates and know-it-alls, but spelled them out clearly to ordinary people. Yes, Father, that’s the way You like to work.’ (Matthew 11:25-26)”

Christians are not perfect; we’re mainly just a collection of losers, freaks and weirdos who have discovered the beauty of the love of Christ. His light chases away our darkness (John 1:5), and we have found peace no human mind can comprehend (Philippians 4:7).

His love gives us the strength to navigate a lost and dying world. His mercies make us wanna get up in the morning.

So to all my brothers and sisters, I love ya! Welcome to the freakshow!

(Image by Jamie Kucinski, first on the left, drummer for the mind-altering band XIII Minutes)

OFFICIAL VIDEO FOR “Welcome to the Freakshow” by The Protest:
https://www.youtube.com/watch?v=paLoh71QJoQ

Tell ‘em Rob from Demonkill sen’cha! Won’t get you any kind of merch discount, but still…

Here’s a selfie of me with Josh Bramlett, lead singer of The Protest, after their live set.