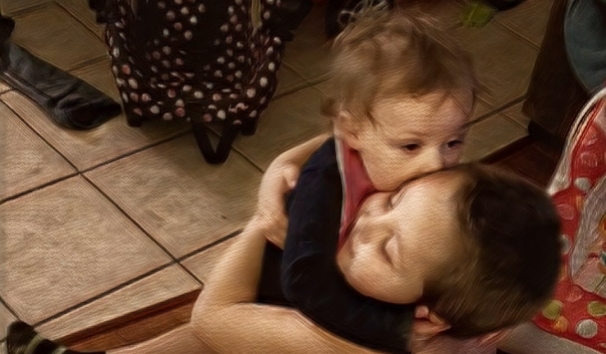 I was never a monster, I was just kind of a jerk sometimes.

Due to my constant sighing and eye-rolling, people could easily tell I was frustrated when I was young. James 1:19 says, “My dear brothers, always be willing to listen and slow to speak. Do not become angry easily.” I was like the antithesis of that. I was normally unwilling to listen, quick to speak and even quicker to anger.

Sure, I just passed the half-century mark, but I’m trying to improve my attitude. The way I figure, it’s better to be late to the party than to not show up at all.

A few nights ago my wife, Laura, and I were awakened by a knock at the door. It was 2:40 a.m., and two police officers were on our porch. I had taken some ibuprofen a couple hours earlier, which always makes me sleepy, so I was a bit disoriented when I answered the door.

“Sorry to bother you, sir, but were you in a high-speed chase from authorities in Christian Country about a half hour ago?”

Christian County is about 45 minutes south of us, and I was standing there half-asleep, in my sweatpants, cut-off t-shirt and barefoot. He told me later it was pretty obvious right off the bat they had the wrong guy.

“We received a call that a vehicle registered to you and matching your car’s make and model was involved in a chase within the last hour. How long have you been home?” he continued the questioning.

I was so discombobulated I couldn’t even remember how long I’d been home. I stammered for a minute and then my son, who’d gotten me up when the doorbell rang, walked up behind me. “How long have we been home?” I asked, confused.

My wife then came up behind me and told the man we’d been home since mid-afternoon. The second officer checked the plates on our car and then yelled to his partner, “They just said the vehicle was GRAY, and his is BLUE. Also, there are two different license plates on the car.”

The cop on my front porch said, “Ok, THAT explains it.”

I guess I’m out of the loop when it comes to crime, and asked the first officer, “Why do my tags not match? We just renewed our tags last month.”

“Normally that means someone stole your plate and replaced it with another. Both cars are the same make and model, so they were probably driving around looking for the same type of vehicle, and just swapped out the license plates.”

I was still confused, as this is not my world at all. “Why would they do that?” I asked naively.

“So they can commit a crime and blame it on you” the second cop replied from the front yard. Now it was FINALLY becoming clear.

“Well, you folks have no record, and criminals don’t usually answer the door to us in the middle of the night. That, plus the different color of the car and the tags not matching; it’s pretty obvious what happened here. Let me give you a report number, and you can take that to the License Bureau to get new plates. Keep the number, in case you get stopped for only have one plate.”

“Sorry to bother you folks,” the second officer chimed in. “Y’all have a good night.”

As they were walking away, I said, “Hey, uh, just one more thing.” Both turned around and I said, “I just want you both to know we appreciate all you do, and the sacrifices you make. We pray for your safety every day, and fully support the police.”

“Thank you,” they both replied, even grunting a half-smile, and walked away.

Extreme moods of any kind are contagious, whether it be anger or kindness.

Laura and I went to the License Bureau this morning to get our new plates, and we were our usual, friendly selves. I noticed, however, that the young lady behind the counter wasn’t so neighborly. Now, this used to bother me, as if she’d somehow rejected my gift of peace and laughter.

But people like this deal with a lot of nastiness, and I would imagine they have to put up an emotional guard so all the negativity doesn’t wear off. I sorta stopped talking during the whole transaction, figuring the women wasn’t interested in our little anecdotes, but Laura…man, she never gave up. She kept talking about how crazy it was that our plate was stolen, of how much easier it is to use her debit card instead of writing a check (even with the $1.25 fee) and her favorite restaurants in the area.

She mentioned one particular eating joint, and the lady behind the counter gave a little grin and said, “I love that place. It’s just been there about a year.”

“Wow,” I thought, “Laura’s kindness wore her down.”

I knew immediately, this thought was inspiration from the Holy Spirit.

God seemed to be saying, “Anger, bitterness and spite can wear people down and destroy their good mood; likewise, happiness, joy and kindness break through emotional walls. The power to make someone’s day a little brighter is fully within your grasp.”

Laura and I caught the elevator and I said, “Our kindness wore her down, did you notice that?”

Grinning her contagious smile, she replied, “Yeah, THAT’S TRUE! She was sweet.”

I’ve watched Laura do similar things time and time again. Noticing another female looks exhausted or frustrated, she’ll say something like, “Your eyes are SO pretty!” or “Wow, that’s a BEAUTIFUL ring.” It’s truly astounding how quickly their moods brighten.

Seeing her brighten people up for so many years, I’m just now beginning to do the same. It’s harder for guys, and I can’t compliment women the way she does because it would appear as I’m flirting, but I do what I can.

When we got back to the car this morning, I was putting the new license plates on the car when I suddenly heard shouting from behind me. It was a young lady screaming at an older man who appeared to be her father. He and I had exchanged glances on the way out, and I said, “Hi,” but he just kind of nodded his head and then looked back down to the ground.

He looked defeated, miserable, and listening to his daughter yelping at him all the way to the car, I finally understood WHY.  My kids treat me so well that I can’t fathom being treated like an animal by your children. How disheartening that must be!

“Do not be bitter or angry or mad. Never shout angrily or say things to hurt others. Never do anything evil. Be kind and loving to each other. Forgive each other just as God forgave you in Christ. (Ephesians 4:31-32)”

So I just wanted to share my heart today, and encourage you to be KIND in this angry world. It’ll catch on quicker than you can imagine!