My son and I went to Europe for his senior class trip and ran across this amazing art at a church in Oxford: 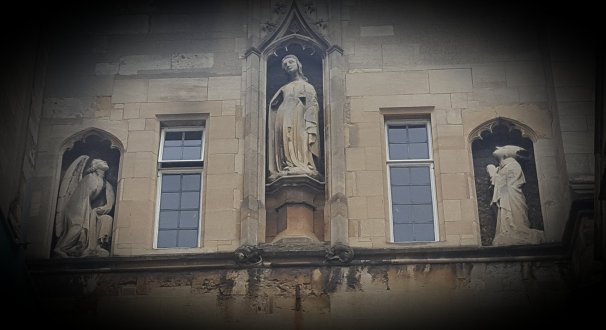 Note the priest on his knees to the right, praying for the soul of the person in the middle. On the left is a demon.

Some have said the person in the middle is leaning just a bit to the right, toward the fallen angel, and I would agree. Many of us tend to favor darkness over light, if only just a bit, and even if it’s unintentional.

It all comes down to choices.

I know people who have good lives, but are the most miserable, spiteful and angry souls you’ve ever met. People you don’t even want to hang around because they’re infuriating and exhausting.

These types of folks anger me, and I’ve got just enough salt in my veins to tell ’em exactly what I think, so I try and stay away. Even as a Christian, I’d rather smack ’em than look at ’em. Sorry if that sounds rude but it’s true.

It’s not emotionally healthy for me to be around these types of people, so I stay away from them, even if they’re in my own family.

Then there are those shimmering spirits.  Those bright and shining souls who could find a silver lining in a house fire.

“Sure is a purdy shade of orange, ain’t it?”

Everything in life is a choice. Each one is influenced by our circumstance and choice of compatriots, for certain, but when it comes down to it…

You choose which one you’re gonna let in: darkness or light.

Don’t blame your past or your parents or your priest or your problems or your pain. They can’t serve as a shield on Judgment Day when it’s just you and God.

If you’re an ugly, foul, loathsome beast to your family and friends, it will catch up to you. That pitch blackness will continue to leak out slowly, comment by nasty comment, until you’re drowning in your own putrid stench.

The darkness hiding in your soul will one day drown you in a fiery lake of your own making.

On the flip side of that coin, if you’re not one of “them,” but rather, have one in your life, I would encourage you to separate yourself from them as much as possible. “Scrape ’em off!” as Frank Cross stated in “Scrooged.”

Your life is a vapor which soon passes away, and you’re in the middle of a war between good and evil, just as the picture of art I posted above displays.

The choice of whose voice you’re going to listen to—God’s or the Devil’s—is fully up to you. Don’t let your abusive husband or your bitter mother or your angry son make the choice for you. It isn’t theirs to make.

It’s really as simple as that.