I’m my own worst critic, to be certain. 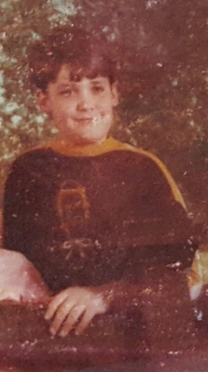 I was overweight and painfully bashful. Look at me, with that shy smile and stupid Laurel & Hardy shirt! I was like a magnet for insults, it seems. Other kids would call me all the names associated with being overweight. I’m not one to cry over the proverbial spilled milk, but it’s nearly impossible not to carry those types of insults with you into adulthood.

God, though, saw fit to bless me with an amazing family. I have a Bachelor’s and a Master’s degree. I work at a Christian university, helping undergraduate students and prisoners.

That’s not to brag, as I’m not much in the world’s eyes, but I’m a blessed man. I have riches most will never discover.

That being said, however, nobody else looks at me as critically as I do. Others see my assets; all I see are my liabilities. My faults and shortcomings.

Maybe you feel the same way.

God doesn’t judge people the way we do. He looks right into your heart, and sees the kind of person you are on the inside.

The prophet Samuel was chosen to anoint Saul as the first king of Israel. When Saul turned his back on God, however, Samuel was told to go visit a man named Jesse, and that one of his son’s had been chosen as the next king to replace Saul.

When Samuel arrived, he noticed a handsome, strapping lad named Eliab right off. Great hair, great smile, BUFF to the max. In 1 Samuel 16:6, the Prophet said, “Surely this is the Lord’s anointed!”

But in verse seven God responded, “Don’t judge by his appearance or height, for I have rejected him. The Lord doesn’t see things the way you see them. People judge by outward appearance, but the Lord looks at the heart.”

Samuel carefully looked at all Jesse’s sons, lined up and smiling, but didn’t find the one he felt God wanted him to name as the nation’s next great leader. He asked Jesse, “Do you have any more sons? Is this it?”

Almost embarrassed, Jesse said, “No, there’s our youngest, David, but he’s taking care of the sheep.” In other words, “I didn’t think him worthy to be here,” but Samuel instructed Jesse to fetch him.

His brothers, and possibly even his dad, saw him as a child.

But God saw the heart of a lion.

In verse 12 God told Samuel, “This is the one; anoint him as the next king.”

Ya see, to most people, we are our faults. We are our weight, our looks, our frailties, our inabilities.

But with God, lambs become lions.

So, from one lamb to another, I’d like to encourage you to forge ahead, in spite of that which the world—and possibly even your own self-loathing—tells you.