I have a bit of an anger problem, I’ll admit. I’m not really a jerk to live with, like I used to be, but it still rears its ugly head every now and again. Part of it is because I’ve lived in this prison of pain for three and a half decades. Anyone who suffers chronic pain on a daily basis understands the anger and depression it can cause.

Part of it is just left-over junk from when I was a kid. Seems my go-to for an irritating situation is to sigh and roll my eyes, which I try not to do. OH how I try, but you can ask my wife: sometimes the sigh slips through.

I’ve mentioned this before, but a former pastor of mine, Brother Stan Welch, made a a fascinating statement about anger, which I still remember 30 years later.

“God can use someone with an anger problem. The way I figure it, anger is just misdirected passion. Now PASSION God can use; it’s those people who are dead inside that are hard to use.”

I guess that always stuck with me because, even being a Christian for most of my life, I still feel like an angry rebel. My anger is no longer directed towards my family, although the devil fights me pretty hard sometimes in that area. Likewise, my rebellion isn’t toward society, the church, family or friends, but rather, against the darkness. Against pain, depression and the devil.

Yeah, that’s where my anger and rebellion are geared these days.

Now, when I say “God can use angry people,” I’m not saying it’s God’s will you STAY angry, because He clearly says we need to be working on our anger issues, trying to be calmer and more loving.

The Lord even acknowledges we’re going to get angry, no matter how “patient and kind” we are. “In your anger do not sin: Do not let the sun go down while you are still angry, and do not give the devil a foothold.” (Ephesians 4:26-27)

“In your anger…” So God fully understands we’re going to get angry, but when it happens, try not to do anything stupid. Easier said than done, I know. The holes in my wall when I was a young man will attest to that, as I had a nasty habit of punching them when I got mad.

A friend of mine, Dr. Pat Berkram, used her anger to help a group of prisoners in Montana State Prison (MSP). Inmates loved Dr. Pat, affectionately calling her “Grandma.” She worked as a nurse at MSP, and offered to purchase a college course for one of the inmates. Officials, however, told her they wouldn’t allow it. She suspected it was because the course was Christian in nature, although she was told it was against the rules for employees to use personal funds to make purchases for inmates.

I can’t speak to the legitimacy of her claims, but what I do know is she got mad. REALLY mad. They told her she “can’t” buy a college-level Bible course for a prisoner, and Dr. Pat said, “We’ll see about that.”

Six months later she officially opened a prison study group for prisoners to take Bible College courses, free-of-charge, with her as the leader and teacher. Grandma used her anger in a positive manner, took on the system and won. 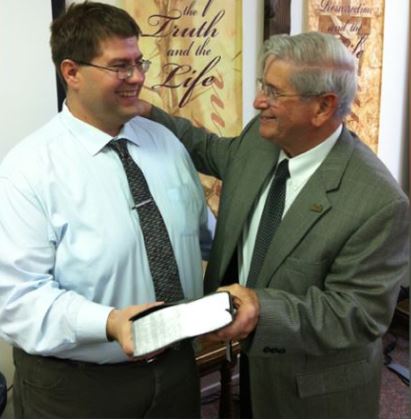 Another little “ball of fire” person, like Dr. Pat, who used his passion for God’s glory is Chaplain Bob Durham. When the Chaplain started working at Global University (a fully-accredited, Bible-based, distance education college, where I also work with undergraduate students and prisoners), he was told there was no “Prison Ministries” department. All we had at the time was a ragtag list of about 50 inmates who were taking courses.

Today, the Prison Ministries Department consists of several volunteer graders, many of them retired ministers, and services about 3,000 inmates. Incredible.

The thing about Chaplain Durham is that he’s a bulldog. He’s a little spitfire, and once God puts something in his mind to do, you can bet next week’s paycheck he’s gonna get it done.

He and Dr. Pat are bulldogs for the Lord, and they get things done. YES they’re passionate about what they do, but man, God uses them to further His kingdom.

Jesus had one of those “bulldogs” among His disciples. Simon was extremely passionate, and also had anger issues, but Jesus changed the man’s name to “Peter,” because He knew passion can be used for God’s glory.

Jesus said, “Now I say to you that you are Peter (which means ‘rock’), and upon this rock I will build My church, and all the powers of hell cannot prevail against it.” (Matthew 16:18)

This is amazing, right? Peter, A man who was so terrified of being arrested with Jesus, he denied the Savior. When someone recognized him as a disciple, Peter, in his fear and anger, began to curse and swear, saying, “I don’t know the man!” (Matthew 26:74)

Peter, who grew so incensed when Jesus was arrested, he pulled out his sword and cut a soldier’s ear off (John 18:10).

Yeah, ole Peter was passionate, which is why he’s my favorite disciple. He had “anger issues,” but Jesus also seen a strength in him; a burning desire to be closer to his Lord. Once when the disciples were in a boat, Jesus came to them, walking on water. Most of the men were terrified, but Peter asked the Lord if he could join him.

So Peter stepped out of the boat and started walking on water (Matthew 14). Everyone seems to focus on his unbelief when he started to sink a minute later, but I always wanna ask those people, “Do YOU have the guts to get out of the boat, bro? Do you have what it takes to put your foot on water and expect solid ground? I sure don’t.”

We can also see that passion when, after Jesus’ crucifixion and resurrection, some of the disciples were fishing. John (in chapter 21) said, “It’s the Lord!” and they began to maneuver the boat to shore.

Peter couldn’t wait that long, however, and literally jumped in the water to get to shore faster. He loved his Savior so much, he left the safety of the boat and his friends, just to get closer to Jesus.

So if you have an anger problem, God can still use you. He has a funny way of taking misdirected passion, and REdirecting it for His glory.

Dr. Pat used her passion to start a prison study group which is still in existence, with four college degrees given out to three graduates so far.

Chaplain Bob also uses his passion for Christ, fighting darkness, the devil and sometimes “the powers that be” to help hundreds of prisoners every day. In fact, our Prison Ministries Department has done so much good, this sign greets them every day when they walk in the office:

Finally, Jesus used Peter’s passionate spirit to build His church. We can read about all that and more in the book of Acts.

So bring your anger, your pain, your depression, your anxiety, your doubts and fears to the Lord. Not only is He not put off by your passionate spirit, he can USE it.

Just trust Him and see.