There are days when this is as good as it gets. Not ‘I made a lot of money today.’ Not ‘I sealed an amazing business deal’ or ‘I was the envy of others.’

No…only that I didn’t give up.

Depression is a BEAST, in case you didn’t know. Chronic pain is a freaking LIFE-CRUSHING DEMON that’ll suck the joy from your marrow if you let it.

But you kick and scream and fight against it, and never give up, and with God’s help, you can live to fight another day.

My Uncle Kenny was in stage four cancer YEARS ago and should be dead, but still he rages on.

My Uncle Aaron should’ve overdosed many times over, but the Lord had other plans. He survived, and rages on.

My cousin Kathy contracted cancer, but never stopped fighting. She didn’t let it steal her joy, rang the survivor’s bell and rages on.

My friend Christy survived an abusive marriage, drug and alcohol addiction and the loss of her precious son, but never gave up. She never surrendered, and rages on to this day.

My daughter survived a drug addiction and rages on. She could’ve been dead in a ditch or in prison. Instead she is an amazing wife, mother and Registered Nurse, dedicating her life to helping others.

My son survived suicidal tendencies and a spirit-killing darkness to be one of the brightest lights anyone has ever seen. He rages on.

My son-in-law, Josh, fights anxiety every day, and while he admits it would be easier to give in some days, he rages on. He conquered an addiction to drugs which took his family away from him, only to vanquish the dark and win back his wife and children.

I made it through a suicide attempt, and continue to battle terrible pain and depression, choosing each day to rage against the darkness in the Name of Christ.

My friends the Singo’s (Pastor Mike, Tammy and their son, Matt) survived the horrific death of Matt’s little brother, Nate, but never quit. Evil chased them HARD, but never conquered. It’s an ugly, uphill battle most days but still they rage on in the Name of Jesus.

My buddy Brian, a former world-class, deadlifting champion, lived through drug addiction and the loss of people such as our friend Carl. Days are rough but he rages on.

My sister Netty, much like Christy, made it through an abusive marriage and addiction, regaining her goofy sense of humor. She rages on.

My cousin Rick Weddle, survived prison, and he and his precious wife, Lisa, lost both their teenage sons. Life nearly stomped their guts out, but they never gave up, and lived to rage another day against the darkness.

Some of us have a great affection for heavy metal, while others have art or other creative endeavors, but one thing we all have in common is that, with all our SOUL, we took to heart the Bible verse which simple says, “I can do all things through Christ who gives me the strength.” (Philippians 4:13)

Decide today that you will live to RAGE another day. With God on your side, all of Hell can’t stop you. My family, my friends and I are living proof. 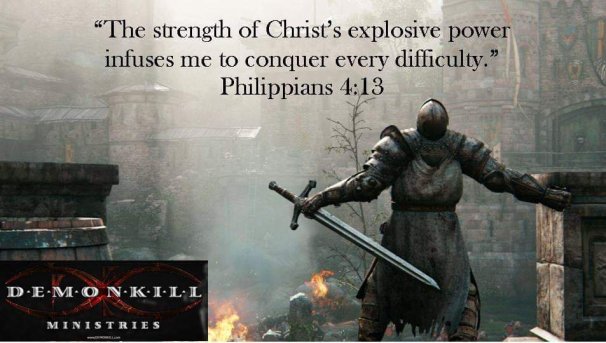