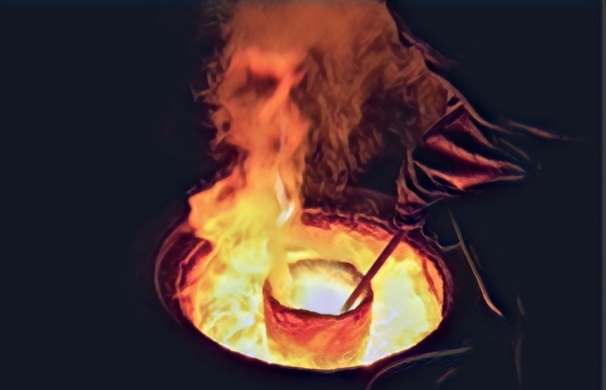 The idea of God-approved suffering is a hard pill for many to swallow. Then there are those who argue, “Does He SEND the suffering or just ALLOW it?”

Wow, that’s a deep question, and as I’ve stated on many occasions, I’m a storyteller, not a theologian, so I won’t tackle that one. What I would like to address is how God uses suffering for our own good.

I understand THAT idea is also challenging, but I believe it’s true.

“Enjoy prosperity whenever you can, and when hard times strike, realize that God gives one as well as the other—so that everyone will realize that nothing is certain in this life. (Ecclesiastes 7:14, emphasis added)”

Ain’t it the truth?

The process of refining silver—basically morphing it from a USELESS to a PRECIOUS metal—requires putting it through the fire. The process separates the precious materials from the “dross,” which are the worthless parts.

The Silversmith could talk to the metal all day long, but you know what good that would do? NONE. When he puts it through the fire, it begins to take the shape of precious silver.

“In the same way that gold and silver are refined by fire, the Lord purifies your heart by the tests and trials of life. (Proverbs 17:3)”

As a Christian, trials keep me at the foot of the Cross. Tribulations keep me searching for the very face of God for release and relief. Sometimes it comes immediately, and other times I’m left in the fire a while.

I’m sure you’ve seen movies where craftsman forged a sword from a worthless, piece of steel. Again, it’s put through the fire, and with a sharpening wheel and mallet, the metal is slowly pounded, sharpened and crafted into a weapon. It is neither an easy nor a quick process.

It takes lots of pounding. Lots of heat. The metal is sharpened over and over and over, ever so gradually forging a blunt piece of metal into a sword worthy of a warrior.

When we’re in the midst of trials, it’s not pretty. It hurts, and it’s easy to think God doesn’t care about us. We begin to wonder why He’s so callous as to allow us to be wounded. But what if He’s not doing it to punish us?

What if the pain, the trials, the suffering and the fire are all to purge the dross—the rubbish—from our spirit? What if He’s fashioning you into a mighty weapon, to be used for His glory?

“Like a refiner of silver he will sit and closely watch as the dross is burned away. (Malachi 3:3a)”

A warrior isn’t born, he’s CRAFTED by years of training, pain and blood.

Think about a professional athlete; does that just happen? Are they born into it, like royalty?

Of COURSE not. They’re fashioned, through years, maybe decades, of training, agony, and failure.

“Only those who dare to fail greatly can ever achieve greatly.” — Robert F. Kennedy

As for me, I feel I’m at the precipice of a ministry which will reach many people, through my writing as well as speaking. My message is one of hope. It’s summed up in my motto, “Never give up, never give in, never surrender!”

That being said, I didn’t come by this naturally; it came after decades of suffering, both physically and emotionally. Through pain I’ve learned to not give up when things look bleak.

“Then I will purify them and put them to the test, just as gold and silver are purified and tested. They will pray in my name, and I will answer them. I will say, ‘You are my people,’ and they will reply, ‘You, Lord, are our God!’ (Zechariah 13:9)”

So, again, I pose a question which may be haunting to your soul:

WHAT IF GOD IS ALLOWING YOUR CURRENT SUFFERING TO STRENGTHEN YOU? What if He’s letting it happen, watching you intently the whole time, as the Silversmith does during the refining process, to make sure the fire is hot enough to burn away the dross, but NOT hot enough to destroy you?

While the whole “refiner’s fire” thing is familiar to long-time Christians, my blogs aren’t theological in nature, so hopefully this has helped someone to MAYBE begin to think of trials in a little different light.

Because, if the fire toughens, strengthens and purifies, shouldn’t it be considered a blessing, not a curse?

(Many thanks to my friend, Brian Oldham, who inspired this blog)