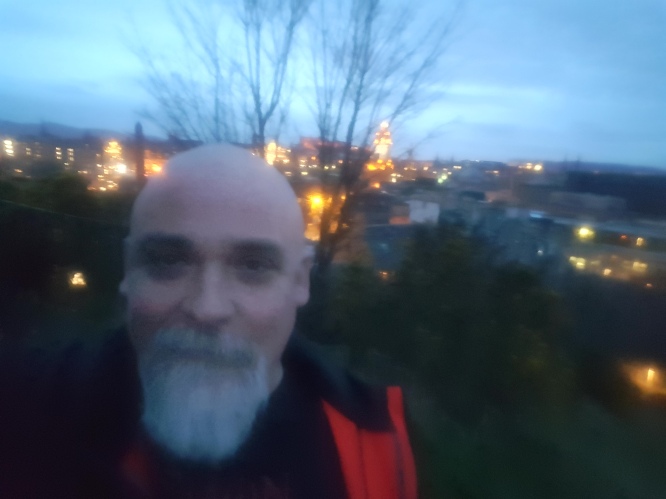 This is a selfie from atop a steep hill (felt more like a mountain to me) in Edinburgh, Scotland. It was the senior high school trip for my son, Trey, this past March, which I was blessed enough to accompany him on. We had been pushing ourselves hard for several days by this point, and it felt as if we’d walked all the way from London to Edinburgh. You can’t really tell it in this shot, but I was beyond exhausted, in pain and out of breath.

When we were halfway into the arduous climb, Trey could see I was wearing out quick.

“Ya wanna stop and take a break, dad?” he asked, concerned.

“No, just let me lean on you, buddy. We’re almost there. I can see the top from here.”

We slowed down a bit. Trey told the rest of the group to go on ahead, and I leaned on him for support.

“C’mon, dad,” he kept encouraging me, “you’re almost there! You can make it!”

We did eventually get there, and man, what a view.

We had arrived in London nearly a week before, and the only item on the first day’s itinerary was “go to the hotel.” We had spent 13+ hours on two different planes to get there, and factoring in that I can not sleep on a plane, no matter how exasperated I am, I was spent. Contrary to the opinion of the students in our group, some of us adults thought “just going to the hotel” sounded wonderful.

Our tour guide, Chris, met us at the airport, and told us we’d be taking the train, or “the tube,” as they called it, to our hotel, but we’d be making “a few stops along the way.”

“Are you freaking kidding me?” I thought. “C’mon, just get me to the hotel. I need a cheeseburger and a nap.”

When we made our first stop, Chris said, “Ok, we’ll have a bit of a walk from here.” All the walking that first leg of the journey was underground; up stairs, around corners, nearly running on the long, straight hallways and then up more stairs. I had no idea where we were going. We walked forever.

What felt like many miles later, I was limping in pain and drenched in sweat. Finally, we walked up a small set of steps, into the sunlight of midday, and this was what greeted us: 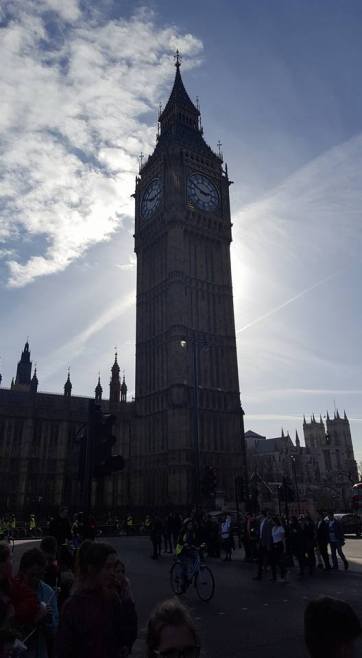 Across the street was the British Parliament. I was stunned, in awe, breathless. We’d made it, and literally at the moment I was preparing to tell Trey to go on without me. I had been mentally detailing the conditions of my surrender for an hour, but every time I opened my mouth to say, “I quit!” I would, instead, whisper a prayer, and keep walking.

And now we were in the heart of London. This was where the last two days and 4,400 miles had been leading. This was the payoff.

You may be in a valley right now, or snaking your way through the underground. You’re debilitated, destitute, disheartened and depressed. Yeah, I get it. I’ve been there.

What you must never forget is this: the path to victory is wrought with defeat. The road to success is paved with every failure we’ve ever experienced.

Helen Keller said, “The hilltop hour would not be half so wonderful if there were no dark valleys to traverse.”

My advice to you would be simply this: don’t quit. Don’t give up and don’t give in. Sounds simple, but it isn’t.

Martin Luther King, Jr, said, “If you can’t fly then run; if you can’t run then walk; if you can’t walk then crawl, but whatever you do, you have to keep moving forward.”

And remember, just like I had to lean on Trey for support, you can sometimes lean on friends and family, but you can always rely on God for support. Proverbs 3:5 says, “Trust in the Lord with all your heart and lean not on your own understanding.” Psalm 62:7 reads, “My salvation and my significance depend ultimately on God; the core of my strength, my shelter, is in the True God.”

Slow down, close your eyes, relax your heart rate, calm your breathing, whisper a prayer and force yourself to press on…step by step. You’ll make it, and when you get to the mountaintop, fill your lungs with the crisp, clean air. Take in the view, for it will be wholly worth it, my friend.

I’d love feedback on both your valley and mountaintop experience. Others can be encouraged by your successes and victories.