My lovely wife, Laura, used to tell me she had no “gifts” to speak of.

“You are a writer, but I can’t really do anything.”

Meanwhile, she was of such great encouragement to me, she literally helped save my life (as detailed in the blogs, “My Suicide,” parts one and two). She’s also the best multi-tasker I’ve ever met. I’ve been known to juggle four or five tasks at once, but Laura can handle three to four times that.

And she thought she had no specific gifts. The people she works with say she’s absolutely indispensable, and I can say the same about her in my life.

You may be the same way, mildly despondent because you’re not even sure why you were put on this Earth.

My dad used to say about his dad, my Grandpa Weddle: “Dad doesn’t expect money or presents, he would just like someone to stop by every now and then and talk to him.”

My first “real” job was a Nurse’s Aid in a nursing home, and we had an “adopt-a-grandparent” program. I chose a little, wheelchair-bound man named Clyde. Look in the dictionary under “smooth”and you’ll find his picture. He’d pull his ball cap barely above his squinty eyes, shuffling through the hallways, never saying much more than “that’s fine.”

Yeah, good, ole Clyde. He was cool. I told him I’d chosen him as my “adopted grandparent,” and he just smiled, and, as expected, said, “Yeah…that’s fine.”

Our main task was just to talk to our adoptees. Not spend money on them, but talk to them.

“People are so lonely,” the charge nurse would say. “Many of these people have nobody to talk to them, so just spending a few minutes visiting with them really perks them up. Don’t do anything fancy, just go sit with him and talk.” 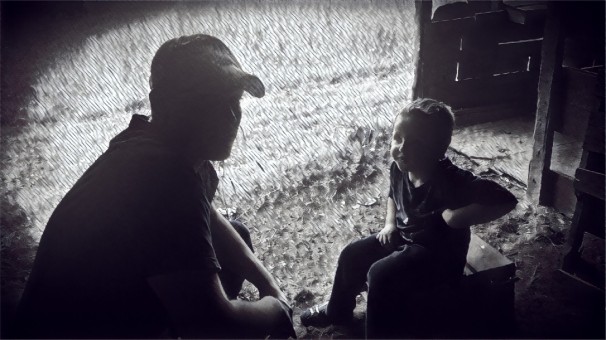 When my grandson comes out to our country home for a visit, he doesn’t need gifts or fancy food, he just wants to hang out with “Nana and Poppy.” One thing my son and I do is take my grandson to the barn and hang out. We just talk, and maybe play cowboys or superheroes. Doesn’t cost me anything except a little time and effort, and makes a world of difference to him.

I’m guessing there is at least one person you can think of right now who would benefit from a visit. Even half an hour, just to stop by and see how they’re doing.

That’s something we can all do. Take a few minutes to contact a friend or family member, just to say “hello,” and let them know you’re thinking about them.  People are literally dying of loneliness, and we have the (super)power of love and laughter on our side. There is a great chance you’ll be a flicker of light in an otherwise bleak day.

After all, a candle doesn’t seem to give off much light until you carry it into the pitch of black, right?