As a Christian, I’ve always kind of avoided (and perhaps, to be honest, been a tad insulted by) Bible verses which refer to me and my spiritual family as “sheep.” The modern-day consensus seems to be that sheep are blind, spineless and ignorant, good for nothing but thoughtlessly grazing the hillside unless they’re being sheared or led to the slaughter.

I recall being in line at the grocery store a few years ago, behind a raggedy-lookin’ man who was yakking a-mile-a-minute about his loathing for Christians. My nonprofessional opinion is, based on the crazy look in his eyes, he was either stoned or LOCO. He was talking to another guy, who remained quiet the whole time, mainly because he couldn’t get a word in edgewise, even if he wanted to. Somewhere in the middle of his nonsensical ramblings, I heard him laughingly declare:

“Sheep are born for one thing: to be SLAUGHTERED!! They’re the stupidest animals on the planet!! Hahaha, I love destroying some dimwitted Christian’s theology with that one.”

I thought, “Man, if you’ve ‘shattered’ someone’s ‘theology’ this easily, they weren’t a Christian to begin with.” My son said, “Dad, you should say something to him! We’re not stupid! That ticks me off!”

I replied, “Wait until he turns around and then look at that dude’s eyes, son. He’s desperate for a fight and I’m not gonna be dumb enough to give it to him. WE know the truth and that’s all that matters.” But the fact was, concerning Jesus labeling His followers as “sheep,” I really had no educated response (not that the man would’ve listened anyway).

Thus, I’ve been researching this a bit the last few days, and thought you might be interested in what I discovered.

I’m proud to call myself a metal-head, but while I listen to Christian metal these days, many of the black metal (i.e. “Satanic”) bands love to self-identify as “wolves.” They are quite fond of portraying themselves as fierce and ravenous beasts; claws out, fangs sharpened to a fine point, thirsty for sheep blood.

While references like this scare some followers of God, please allow me to remind you that Satan is a fallen angel, one of a multitude of created beings. The Creator, God, has the entire universe under His control, and despite rumors to the contrary, there is nothing any angel—fallen or otherwise—can do about it.

Before I launch into the bulk of my blog about the sheep, let me put your mind at ease with the following verses from The Message:

“My sheep recognize my voice. I know them, and they follow me. I give them real and eternal life. They are protected from the Destroyer…no one can steal them from out of my hand. The Father who put them under my care is so much greater than the Destroyer and Thief. No one could ever get them away from him. (John 10:27-29, emphasis added)”

Among many verses comparing Christians to sheep are the following, when Jesus was speaking to the Pharisees, as recorded in John chapter 10:

“The sheep recognize (the shepherd’s) voice. He calls his own sheep by name and leads them out. When he gets them all out, he leads them and they follow because they are familiar with his voice. They won’t follow a stranger’s voice but will scatter because they aren’t used to the sound of it.

“I am the Good Shepherd. The Good Shepherd puts the sheep before himself, sacrifices himself if necessary. A hired man is not a real shepherd. The sheep mean nothing to him. He sees a wolf come and runs for it, leaving the sheep to be ravaged and scattered by the wolf. He’s only in it for the money. The sheep don’t matter to him.

Yeah, there are many scripture references to sheep, but this is one of my favorites because it portrays the Lord, i.e. “The Good Shepherd,” as loving, giving, resilient and protective. He’s ferocious in His love, and will defend us at all costs. He will slaughter the wolves, if necessary, should they mess with His flock.

In 1st Samuel 17:34-36, when David was explaining how he knew God would deliver the giant, Goliath, into the hands of the armies of Israel, he said, “When I am taking care of my father’s sheep…and a lion or a bear comes and grabs a lamb from the flock, I go after it with a club and take the lamb from its mouth. If it turns on me, I catch it by the jaw and club it to death. I have done this to both lions and bears, and I’ll do it to this heathen Philistine too, for he has defied the armies of the living God!”

Now that’s the kind of protector I want in my corner.

“Suppose one of you had a hundred sheep and lost one. Wouldn’t you leave the ninety-nine in the wilderness and go after the lost one until you found it? When found, you can be sure you would put it across your shoulders, rejoicing, and when you got home call in your friends and neighbors, saying, ‘Celebrate with me! I’ve found my lost sheep!’ Count on it—there’s more joy in heaven over one sinner’s rescued life than over ninety-nine good people in no need of rescue. (Luke 15:4-7)”

The Shepherd will fight Hell if He has to, all to rescue one of His lost, little ones.

Concerning the strength of the Shepherd, we find the following, from the article Are you hard enough to survive as a shepherd? by James Rebanks, as published April 29, 2015 on The Telegraph website (www.telegraph.co.uk).

“You need to be tough as old boots. Imagine working for weeks on end in the rain, and then snow, and lambs dying of hypothermia, with the difference between life and death being you and your knowledge. Even if you do your best they still die, and you will need to keep going.

“It is all about endurance. Digging in. Holding on.

“You will also need to be emotionally tough, because part of shepherding is that things don’t just die, they are killed.

“You’ll need the patience of a saint, too, because sheep test you to the limit, with a million innovative ways to escape, ail or die.”

I’ve tested God to the limit many times, I’m sure. Thankfully, the Shepherd is not only courageous, tenacious and vigilant, but patient to a fault. He not only forgives, but will fight man, beast and nature to protect his flock.

But what about this “SHEEP” thing? Are we Christians just mindless, brainless oafs, blindly following our Shepherd into uncertainty and death? Hardly.

Blind faith is necessary, sure, but we’re fully aware of the awesomeness of our Shepherd, and of the future in Heaven to which He’s calling us.

As much as some would like to contest, we’re not dimwitted, either.

In the article Sheep Are Not Stupid, And They Are Not Helpless Either, by Harriet Constable (April 19, 2017, www.bbc.com), we see that “sheep are actually surprisingly intelligent, with impressive memory and recognition skills. They build friendships, stick up for one another in fights, and feel sad when their friends are sent to slaughter.”

Sheep have facial and voice recognition (see previous Bible verse, when Jesus said His sheep know His voice), and favor smiles over frowns.

They can also work their way out of complicated mazes, reaching the exit door even quicker if some of their friends are waiting for them at the end.

“So encourage each other to build each other up, just as you are already doing. (1 Thessalonians 5:11)“

Citing a University of California study from 1993, the author says sheep form long-term relationships, help out those weaker than themselves and back each other up in fights.

They can also deliver quite a painful back kick when necessary.

Many have theorized modern-day sheep are descendants of the mouflon (pictured below), a wild sheep thought to have come from the area now knows as the Middle East (ancient Mesopotamia). 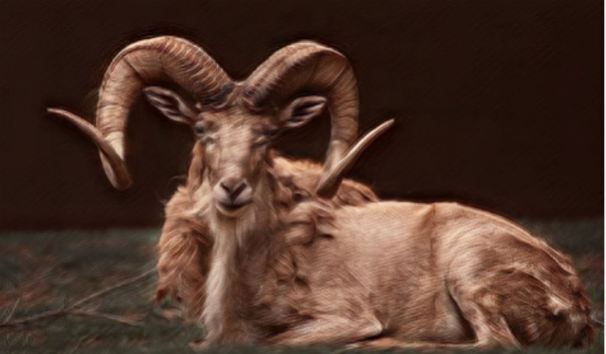 Again quoting Ms. Constable, from the Sheep Are Not Stupid article:

“These ancestors had mighty horns with which to defend themselves.” Even today’s sheep can “deliver a painful kick to anyone who gets too close, especially if they are defending their young. They can also run fast and scale steep cliffs that many predators are not equipped to handle.”

Personally, I prefer this portrayal over the “soft and fluffy” archetype, of which toy companies make stuffed animals. I suppose I’m a softie in some ways, and “cuddly” to my wife and my grandkids, but I’m also not afraid to use my horns, or a good, swift back kick when necessary, to defend my family.

While some are fond of referring to us as senseless, vulnerable and sheltered—a group of people who are good for nothing except grazing the hillside, waiting for the day when we’ll be blindly led to the butcher—this is obviously not the case.

That’s OK, they can think what they want. I’m secure in my identity in Christ, and am now, FINALLY, happy to call myself a “sheep.” My friends have my back and I have theirs, I protect my family at all times, and most importantly, I know my Shepherd loves me greatly, and will defend me from those who want nothing more than to slaughter me.

Thanks for always having my back, God.

3 comments on “Jesus Called Us “Sheep” — Is That an Insult or What?”